Are you a cyborg? Work your body on the Cyborg Catwalk.

During Dutch Design Week several cyborg projects by Petra Ardai, Bartosz Seifert & Ieva Jakuša, Gill Baldwin and many others will be shown. Also, a number of cyborg-themed lectures will be organized during this week.
Phoebe 3.0 by Petra Ardai is an audio-installation, especially made for the Cyborg Catwalk. Phoebe 3.0 is the perfect man and machine synthesis. She is both intelligent and sensitive. She has emotions, yet is not distracted by them. Phoebe always thinks in the long term and always puts community interests first. She has no ego and is not afraid of death. Also, she does not attach to stuff, to her youth or to an identity. She is indefatigable and always open to learn something new. Phoebe has unlimited memory, can set excellent priorities, and make probability calculations and error-free prognoses. Phoebe is self-critical, has no fixed ideas and does not suffer from self-overestimation. Phoebe loves humans. It were humans who made her, right? 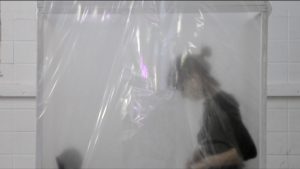 Gill Baldwin is one of the winners of the Call for Cyborgs and for that reason part of the Cyborg Catwalk. With Affective Environmentsthis designer asks us the question whether we can get in closer contact with our physical awareness and well-being by means of technology? The Affective Environmentinstallation is a space for wellness and self-care that is influenced by the physical and emotional state of the visitor in it. When the visitor relaxes, the room slowly gets filled with steam, which has an even more soothing effect. A conversation arises between man and machine, which enter into a mutual relationship with each other. Who influences whom? The transformative character of Affective Environmentsallows us to think about the malleability of the human body and how this can sometimes be seen or felt in a very subtle or smooth way. 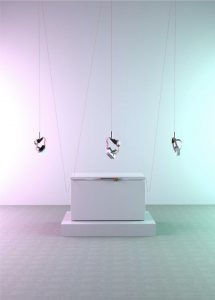 Bartosz Seifert & Ieva Jakuša are also winners of the Call for Cyborgs with Frozen Brain. What if we could store and preserve our memories and identity? Would we then share this information with smart devices? In the United States, human bodies have been frozen since 1976, which – if the so-called cryonics technology continues to evolve – can be brought back to life in the future. Scientists are also trying to map and simulate the neurological network of the human brain. Bartosz Seifert and Ieva Jakusa took inspiration from these developments for their project. Frozen Brainpresents a future in which we can freeze our memories and identities (after our death) and make them accessible to AI and robots, so that these technologies can better assimilate with humans. After cookies, algorithms and digital data processing, will we allow robots to get even better acquainted with us?

Curious? Come to ROBOT LOVE and take the Cyborg Catwalk as if you are a true model. You better work.