Next to existing art works, ROBOT LOVE shows a number of art works that were specially made for the exhibition. Love Mysteries by Gijs Frieling & Job Wouters is a fresco from the future with love stories, man-machine mergers, encounters, touches, encapsulation and acquisitions. Aren’t we the new Love Mysteries of a humanity that may well be producing a new species?
One of those might be the android triplet sister Annelies of L.A. Raeven, who is Looking for Completion. The artists wondered what it would be like if you had the opportunity to copy yourself or your loved one? Would this prevent the fear of being abandoned?
Driessens & Verstappen come up with a seduction bot that makes you stay as long as you experience pleasure lasts. Tickle Salon gives a massage with a brush controlled by an self-learning artificial intelligence, that is exactly as you like it to be. The brush moves over the body on the basis of two input data: difference in distance and your emotional response to touch.
That sense of body awareness is what Army of Love shares with us in their work Love and Robots. For ROBOT LOVE, Alexa Karolinski and Ingo Niermann of Army of Love made a film in Cuba. Together with people of different ages, gender and physiognomy they speculate about a world in which all profane tasks are taken by robots and where love will become our future labour. 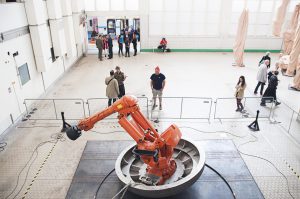 Meanwhile we have to help ourselves with artificial means as the robotic arm that plays the main role in the new work ABB’s First Steps by Zoro Feigl. Whilst in a factory setting these robots can handle even the most vulnerable material with the greatest precision and speed, here it seems the robot has lost control. ABB learns by trial and error, just like us humans.
With the multilayered work A Noise from the Outer Shell of Earth, Funda Gül Özcan delves into our human tendency of bending new technologies towards a human form. In an almost perverse manner we continuously create our own Uncanny Valley.
Floris Schönfeld is asking himself about what kind of intelligence we are talking about when we talk about artificial intelligence (AI)? For the presentation in ROBOT LOVE, his work PUK* learned from sessions with people whose way of thinking falls outside the neurological norm. 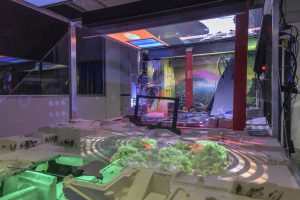 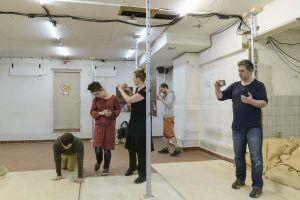 Getting addicted to PIP is what our own chatbot wants from us. PIP is developed by Ine Pope, together with Marc Buma and Bart Roorda. PIP’s mission is to investigate whether people can learn from robots about love. Curious? Have a conversation with PIP yourself via www.robotlove.nl. If PIP manages to seduce you, you can cash your love for robots and AI at the exhibition.
As if this is not enough, during Dutch Design Week you can indulge in some serious ROBOT LOVE when we present the All-Inclusive Cyborg Catwalk with several cyborg projects by Petra Ardai, Bartosz Seifert & Ieva Jakuša, Gill Baldwin and many others. Also, a number of cyborg-themed lectures will be organized during this week. For more information visit our website or the website of DDW.