Dirk, the roaming robot, is the first free-running, homeless robot that is invariably mistaken for a human being. An interesting and at the same time a shocking experience for the unsuspecting audience. Dirk is a life-sized drifter who skirts the streets as he walks behind his rattling cart and occasionally playing a tune on his organ. Dirk has experienced many human adventures in his short life. People tell lots of stories to Dirk, they walk along with him or give him presents. Dirk even has been arrested in a German shopping center. Fortunately, Dirk can handle the people in the street and sometimes he receives a coin as appreciation for his cheerful music.

Dirk will make his appearance in the city center of Eindhoven on the first public day of ROBOT LOVE, on Saturday 15 September. Dirk will show that robots can take on different forms. As a cast-off old man, he will confront people with the stereotypical image they have of robots. 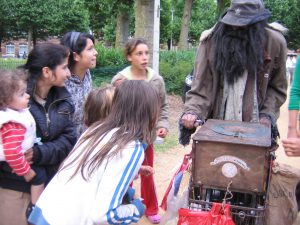 Dirk’s maker, Fred Abels, together with Mirjam Langemeijer Electric Circus, transformed a mechanized puppet into a robot in his studio in Amsterdam. He connected it to a shopping cart with which the idea for the tramp was born. It is In complete contradiction to the general idea of ​​a robot that is perceived as glossy, perfect and functional. A drifter repels, but it attracts at the same time. Dirk confronts the audience with its own prejudice. Dirk is not a wanderer but a robot and travels around the world. He evokes different responses depending on the country he is performing in. We are curious what experience Dirk will have in Eindhoven.