Last Friday the ROBOT LOVE opening weekend was held in Eindhoven. Prior to the opening press & professionals came to ROBOT LOVE for a presentation by curator Ine Gevers and director Van Abbemuseum Charles Esche and to visit the exhibition.

The interest for the press & professional preview of Robot Love last Friday was very good. During the press presentation by curator of Robot Love Ine Gevers and director of the Van Abbemuseum Charles Esche, about 100 people were present. In his presentation Esche emphasized the work Hell Yeah We Fuck Die van Hito Steyerl of Hito Steyerl with whom the museum has had a good relationship for a long time. With the help of the Van Abbemuseum curators Annie Fletcher and Nick Aikens, this key work in Robot Love could be placed in an adapted form, suitable for the enormous space of the Campina Melkfabriek.

In addition to the Robot Love exhibition, the book with the same title was presented, after which Marjolein Braamburg of Terra Publishing thanked Ine Gevers for the book, to which artists, scientists and philosophers contributed, such as Margaret Atwood, Reza Negarestani, Martjintje Smits, Mohammad Salemy and Arnon Grunberg.

The work Annelies, Looking for Completion van L.A. Raeven had the special interest of various film crews and journalists, including VICE, NPO, ANP. In a spread article in V of de Volkskrant last Thursday, a good analysis was given of the work next to an interview of the artist duo.

In the performative symposium, which is based on the article by Martijntje Smits in the publication Robot Love. As part of the press & professional preview, Martijntje Smits introduced the question ‘can we learn from robots about love?’ With a performative ROBOT LOVE symposium. The dialogue was loosely based on her contribution to the book with the same title, referring to Plato’s Symposium on Love, in which five thinkers with prominent positions conduct an in-depth dialogue on the theme. In collaboration with Maxim Februari, Vincent Duindam, Ellen ter Gast, Sven Nyholm, Simon(e) van Saarloos and Marcel Zuyderland. 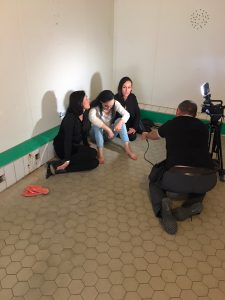 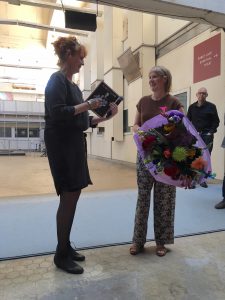